Sea trace in a living mark 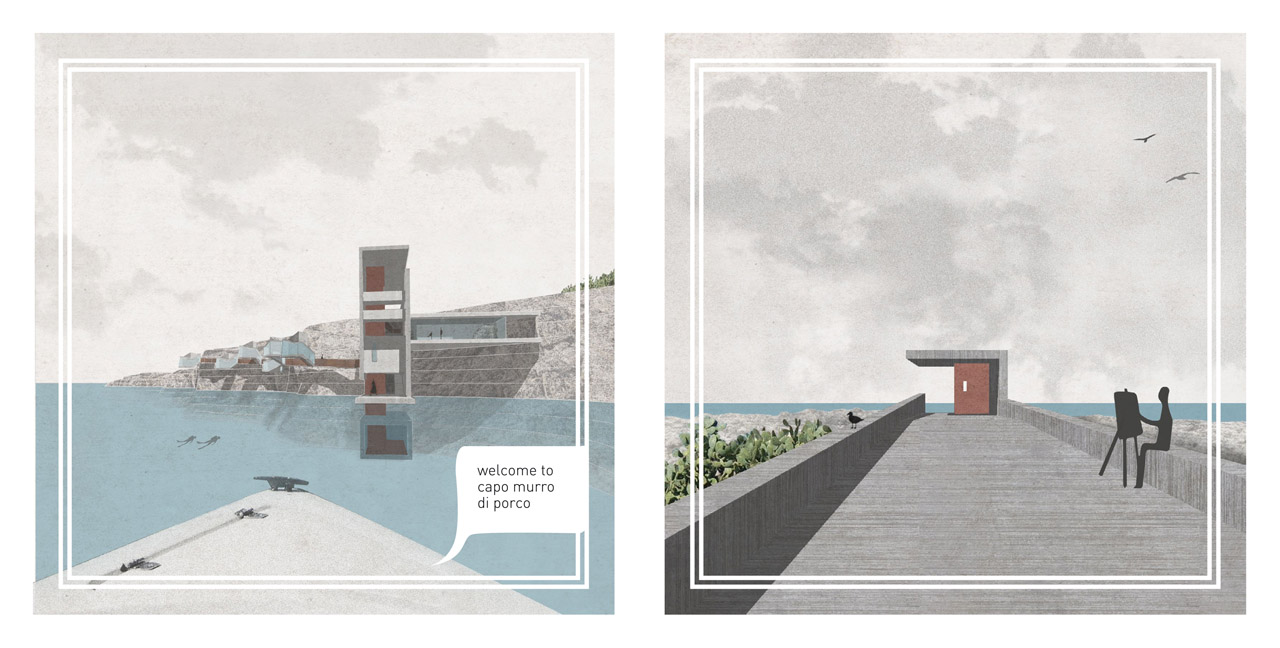 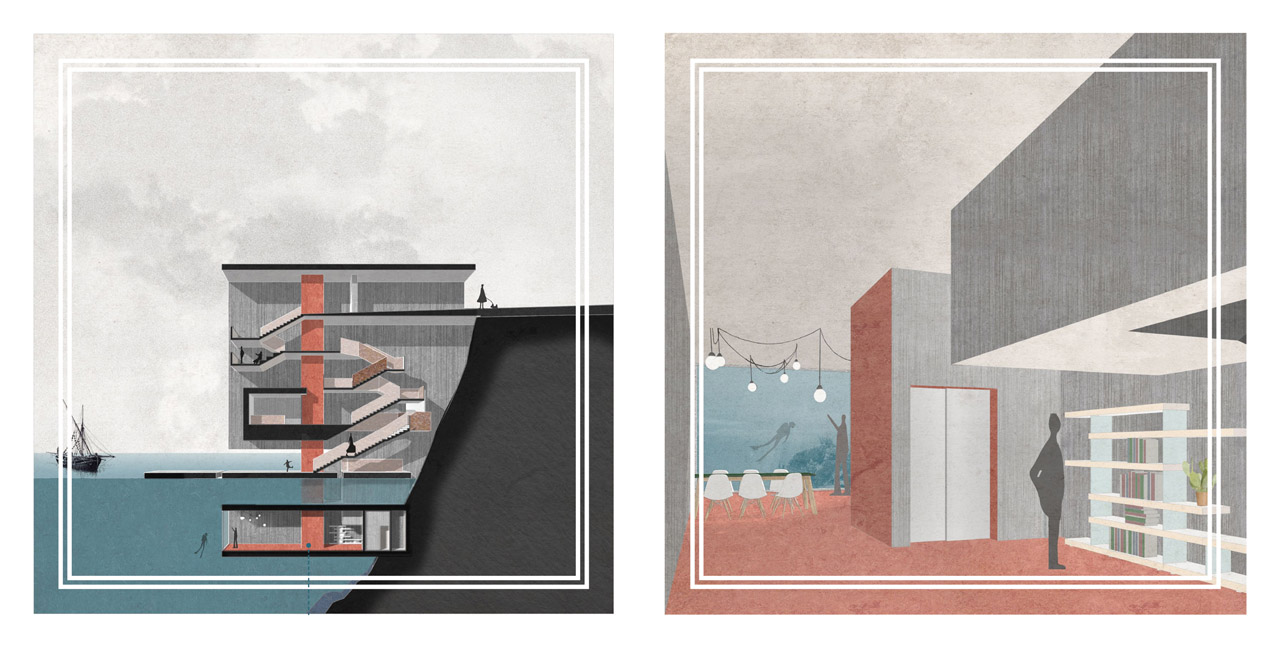 An old lighthouse, a bare moon-like landscape. Our aim is to bring these places back to life, taking into great consideration their inner characteristics. Capo Murro di Porco represents an appealing and polyfunctional centre within an imaginary maritime connection system, which links several interesting places such as Catania and Pozzallo (Malta), the archeological park in Syracuse, the vineyard of Avola, Marzamemi and Pachino and the streams’ island of Portopalo di Capopassero. In order to emphasize the importance of the connection between the sea and the coasts, it has been decided to artificially reproduce this relationship.

This is the reason why, according to our project, the main entry to the lighthouse area comes from the sea: a promenade divided into various levels which follows the reef up to the lighthouse, offering an amazing view of the roundabouts and of the lighthouse itself.
From a planimetric point of view, the project is characterized by two dominant elements linked by a walk through: the existing lighthouse on one side and the new volume on the other. From a functional point of view, the stair represents the connection point among the diverse activities that can be done. For instance information point, Hotel’s hall and reception, the path to the rooms and finally a laboratory for marine biologist at sea level. To avoid jeopardizing the natural landscape, the reef has been chosen as a building site. Therefore the hotel frameworks are built on the reef as if they are anchored to it, granting a breathtaking view on the sea. The houses/snails, like parasites holding on to the rocks, follow an ascendant path along the coastal orography up the pathways. Their location depends on environmental factors such as sun exposure. Indeed, they are built on the eastern area of the project where they are protected by the reef which shades them during the day. Pathways have been developed through the hinterland as well, so as to connect the lighthouse with rest areas located in the southern part of the project area, the most exposed to the sun. 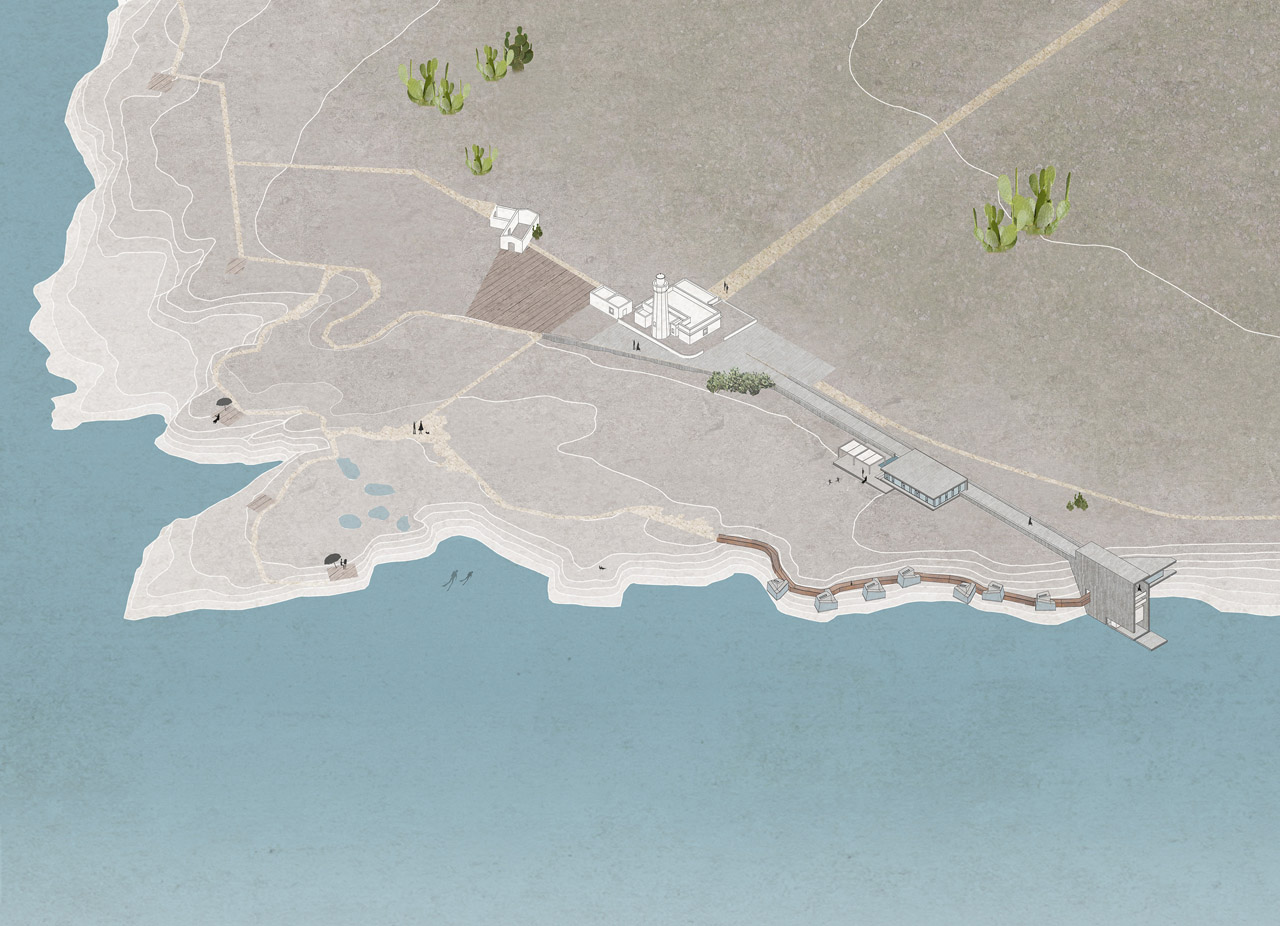 This project is aimed also at creating cultural spaces by using existing factory sites nearby the lighthouse. The proposal is to use these buildings to set up museums showing marine artifacts and wrecks typical of the Plemmirio area history. 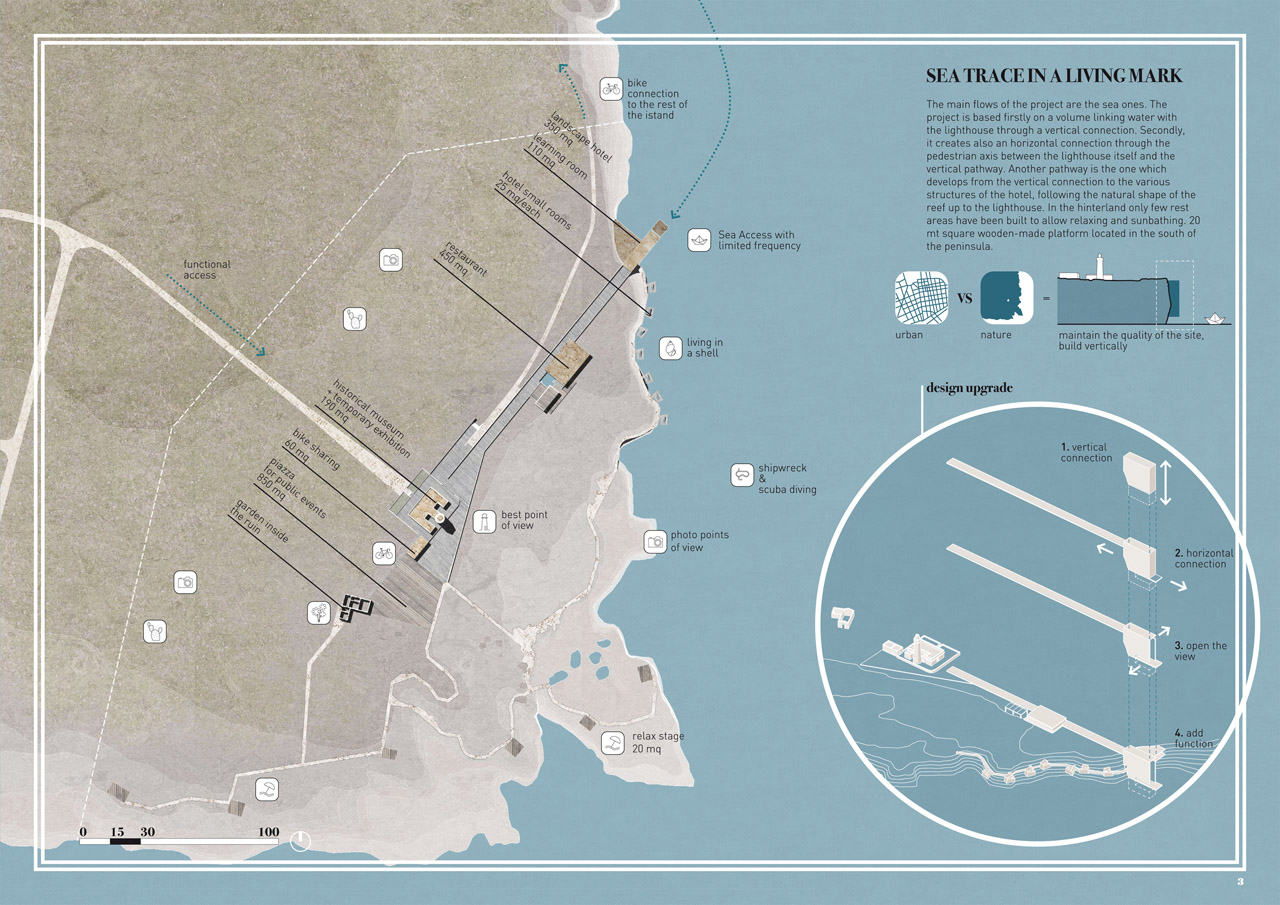 In conclusion, the project has started by considering the urban scale of the whole area nearby the Plemmirio peninsula, inserted within a broader aim of enhancing the seacoasts; as a consequence the main building element represents the connecting element between maritime paths and peninsula hinterland. In particular it has been decided to preserve the inner characteristics of the area and the environmental integrity. Therefore, the building sites develop along the reef avoiding the exploitation of the maritime sanctuary. 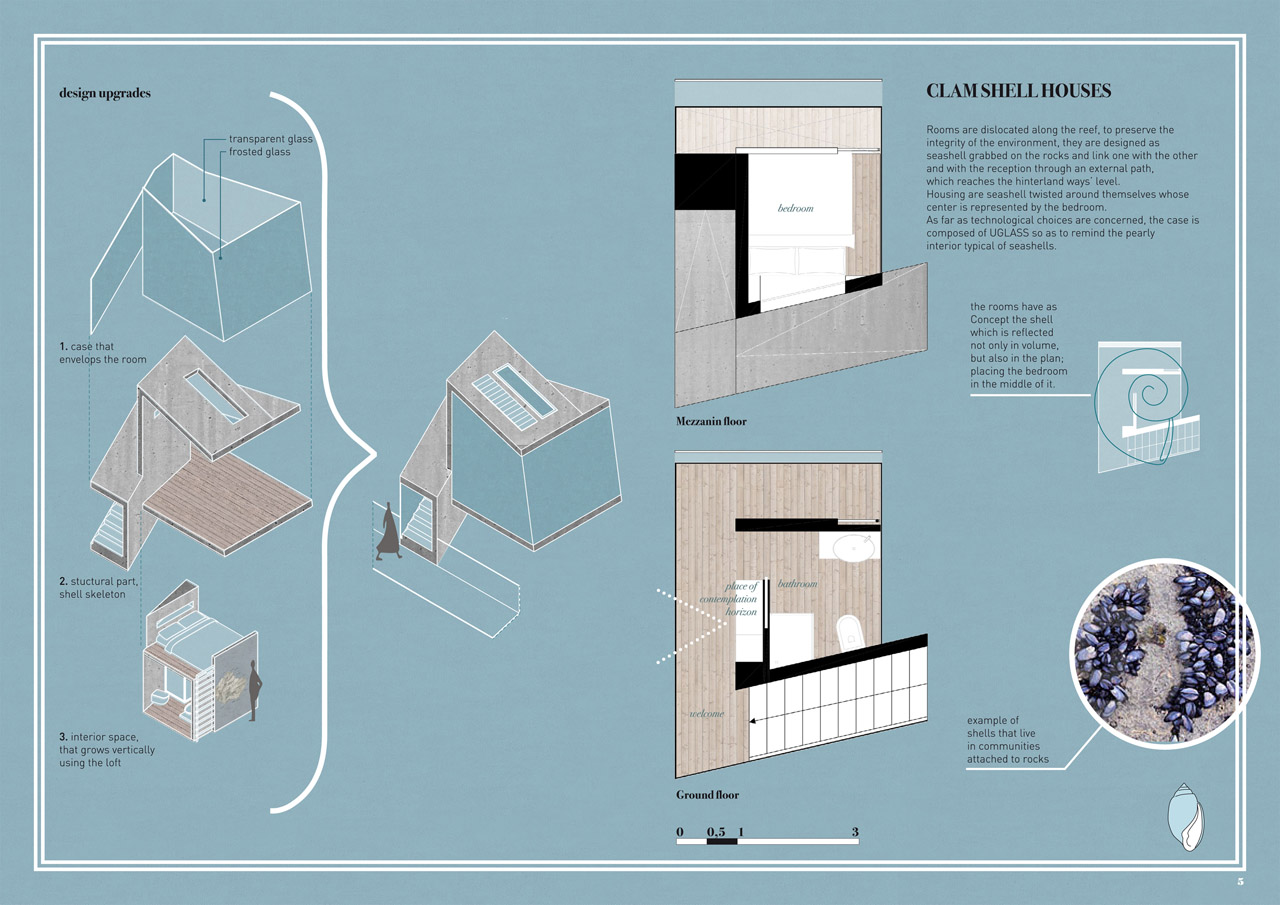 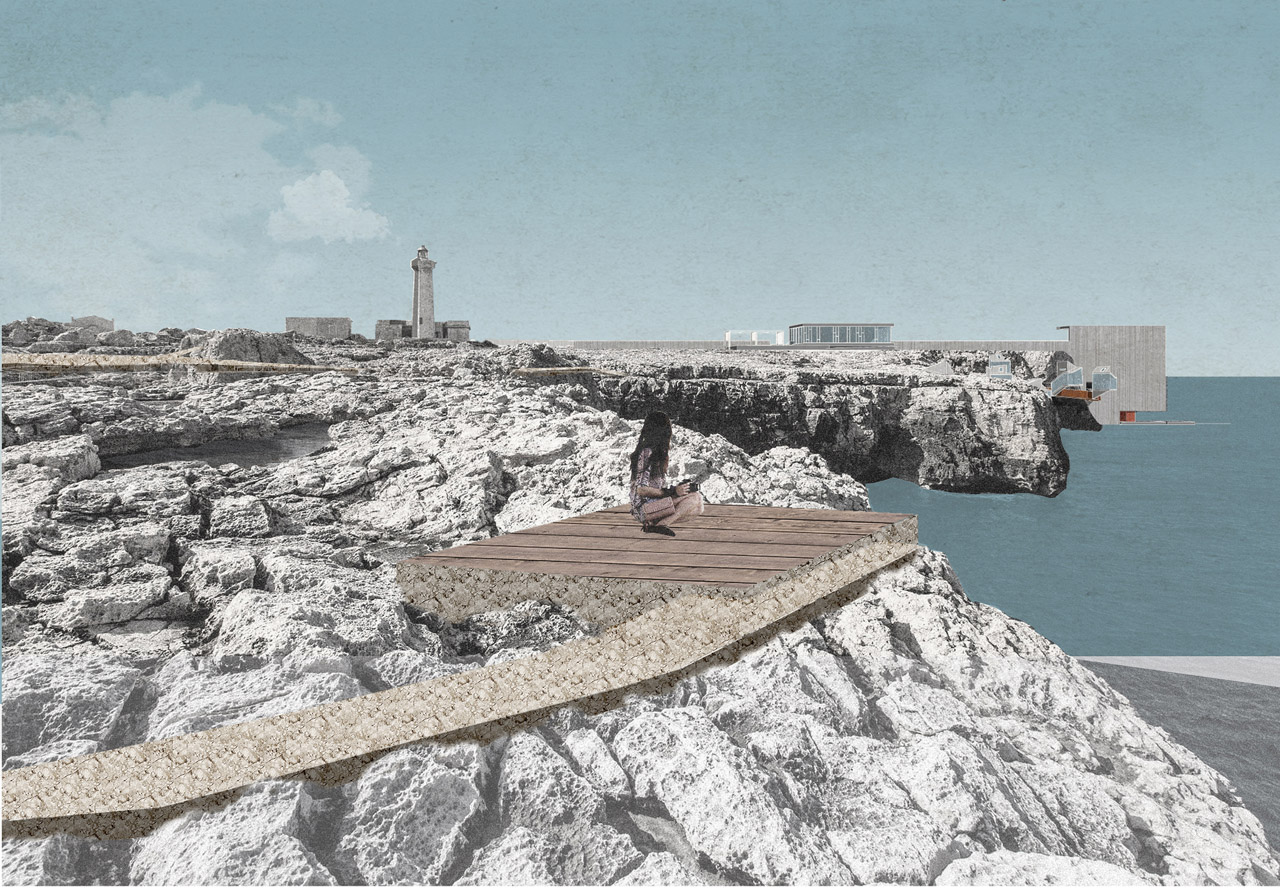